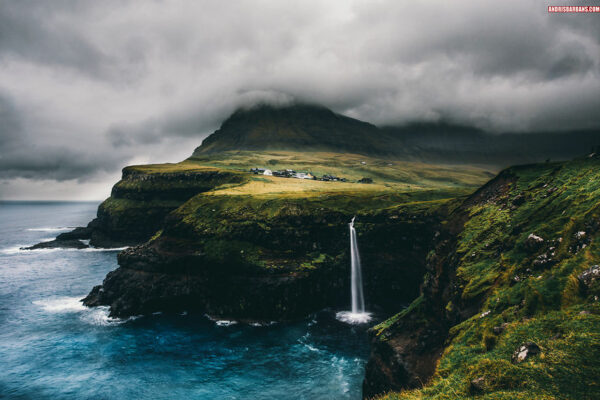 blue-grey sky and sea. Freckled with

spots of green and brown.

The wanderer sees all with

a pair of black beady eyes.

a place to stay. At last,

He perched on top of

him from the blowing

As the sun fell, darkness

sky, with dots of pale

Scattered clouds in lines of laced

Not a single open face

Not a view of living people

Not a friend, a pal, a mate

Mountain shores grow round and tall

But not a rising soul at all

A place of beauty incantation

The sky falls down,

A battle of wills.

Until the coming night.

Of its ever-changing shroud.

Which will see the change all over again.

The poems above were written during an undergraduate creative writing workshop that I ran earlier this year. The writers only had two minutes to come up with a poem after answering a series of questions about a photograph from  Alex Boyd‘s collection The Land of Maybe.  These poems are first drafts and perhaps blueprints for longer ekphrasis poems.

Alen is an undergrad majoring in Zoology. 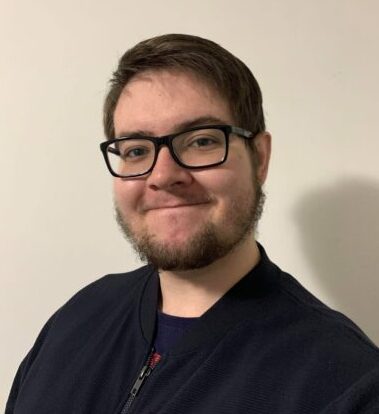 Daniel is currently a university student and  in his first year of Screen Production.

What inspired you to go into Screen Production? I originally wanted to be an actor and author, but after having more stories I wanted to see on the screen than opportunities to appear myself I decided to switch focus to screen production to help make the stories come alive.

Name a book, a CD and a movie you would take with you into your no wi-fi zombie apocalypse bunker? (There’s electricity and a DVD/CD player in the bunker!)

CD: The Lightning Thief: The Percy Jackson Musical from the original Broadway cast.

Movie: Kung Fu Panda, though by the time I decided I’d be devoured by the hungry undead.

Book: How to Survive a Zombie Apocalypse for Dummies, if it’s a real thing.

Most prized possession? My prized possession would probably be my Limited-Edition Spider-Man Playstation 4 console, though I’m not sure how useful it would be in the apocalypse, so for this I’d say my Witcher sword.

Online or Face-to-Face learning? It is so much easier to focus with face-to-face learning. I’m accustomed to learning in the classroom and away from my personal distractions.

Percy Jackson or Harry Potter? Percy Jackson, any day of the week. The realms of mythology that Rick Riordan works with are so immersive, and the characters and stories are much more diverse than in the world of Harr Potter.

Broccoli or cauliflower? Cauliflower. I just like the taste better! 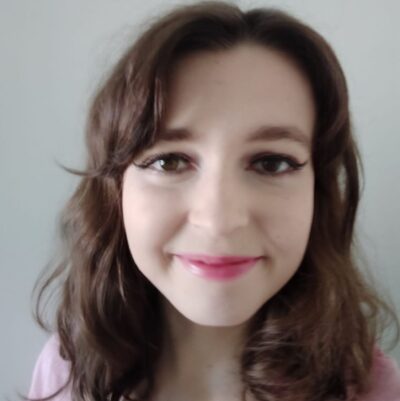 What inspired you study creative media?  Ever since I could hold a pen I’ve been writing so I wanted to include that as part of my academic pathway and career. I got into Sound through my love of music and when I began volunteering at the community radio station, RTRFM. It is my ambition to be a radio presenter and a writer.

Name a book, a CD and a movie you would take with you into your no wi-fi zombie apocalypse bunker? Like Daniel, your bunker has a CD/DVD player.  For a book I would take either The Name of The Wind by Patrick Rothfuss or something practical. The Name of The Wind is my favourite book of all time; it requires a lot of thought so I wouldn’t get bored and it is very long so it would sustain me. Another option would be a survival guide or a book on biology so hopefully I could try and research a cure.

I would bring a CD collection of the Travelling Wilbury’s music. I feel like the themes are very relevant (like the song ‘End of the Line’), whilst providing an upbeat atmosphere in such a hopeless situation. The DVD I would bring is Your Name. It’s my favourite movie because of it’s stunning animation style and complex narrative. It would provide me with a beautiful remembrance of the outside world.

What is your most prized possession?  I would say a poem that my partner wrote for me. I should bring my laptop because all of my creative pieces, university work and other important documents are on it. But the poem would still hold more meaning, so I’d have to pick that.

Online or face-to face- learning? Face-to-face learning, 100%. I really enjoy being able to meet new people and talk with them. It leaves open the opportunity for spontaneous meetings. I also like being able to go into a learning environment where I can surround myself with others who are there for the same purpose.

Percy Jackson or Harry Potter?  What’s the meaning of life? If a tree falls down in a forest and no one’s around to hear it, does it make a sound?  There could not be a harder question.  If I had to, I would pick Percy Jackson because it sparked my love for mythology and the second series The Heroes of Olympus is one of my all-time favourites.

Broccoli or cauliflower? I don’t like broccoli at all, so cauliflower. It is nice when boiled.

I want to rip this collar off

So I can be free.

Want to tear off my sleeves,

To show what they did to me.

Rip open my chest so they can see

What once shone bright and loud,

Has since ceased to be.