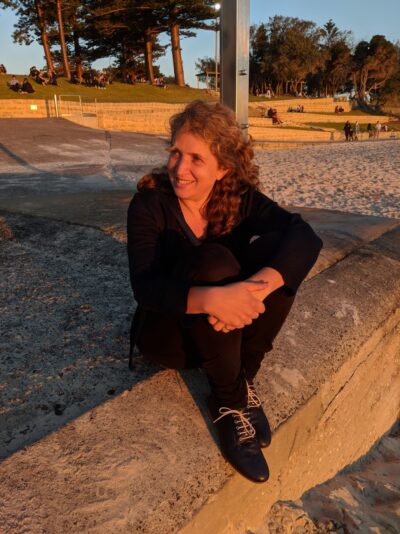 Welcome to a New Day

If the cherry tree were in blossom like this always,
maybe we would not weep at the losses

How a boat moored in the harbour is
quiet now. A friend inside it, or not

eats dumplings, sips soup, sleeps away
from the people she loves in case

too closely on their soft skin,
too near to be safe

of a little girl

in my arms, something uncertain
and beautiful as a cloud

triumphant from behind
a cloud. “Welcome to the world”

welcome to a new day.

And now, two people in dinosaur
suits rush past on

when the rest of the world
has stopped moving.

– By Talya Rubin From The Pandemic Poetry Project 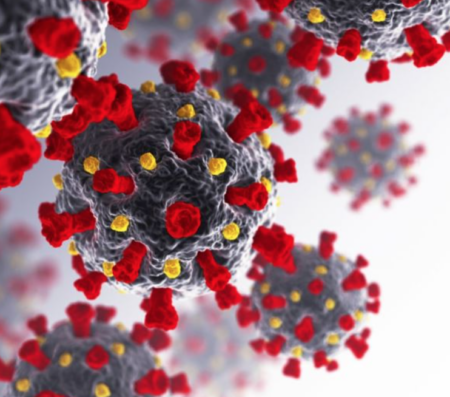 Now based on Wadjuk, Noongar Boodja (Western Australia), Canadian Talya Rubin is an independent theatre maker and poet who works at the cross section of performance, visual arts, video and sound.  She is also a professional actor and radio broadcaster who has taught drama at AFTRS, NIDA and Sydney University.

Talya’s poetry has been shortlisted for the Montreal Poetry Prize, the Winston Collins Descant Prize for best Canadian poem, and was recently long listed for the CBC Poetry Prize. Earlier in her career she won the prestigious Canadian  Bronwen Wallace award for emerging poets.

A few months ago, when  people across the world began to self-isolate and distance themselves from others, Talya reached out to her loved ones across the globe and gifted them bespoke  poems based on sounds, images and moods they sent her. After I read one of the poems and found out she had plans to expand the project, I really wanted to find out more about it.

What inspired the Pandemic Poetry Project ? It came to me in a moment of reflection. I was sitting quietly in my room and it literally popped into my head. I have a very active 7-year-old, so those moments usually come to me after he is asleep, when there is total silence in the house. COVID-19 had just hit this part of the world and there was a kind of gravity to everything. A part of me thought – this is a time to just be with what is happening, not create or make anything. But then this voice cut through and it had a very clear, fully formed idea about reaching out to people in isolation and writing them poems. The questions I wanted to ask were all there from that seed idea. it was a way of reaching out across boundaries and silences and to create poems as a kind of gift to the people participating.

So much had stopped in the world around us, so much was cancelled or postponed or suspended, and it felt like this was something I could give.

When you told me about the project, the first thing that popped into my mind was 19th Century English poet Matthew Arnold’s belief that ‘mankind will discover we have to turn to poetry to interpret life for us, to console us, to sustain us’ [in Cultural and Anarchy, 1869]. How have your friends responded to the poems you wrote for them? That’s gorgeous that you thought that. I admit, I didn’t have as noble an intent when I started, it was just something I felt to do and so acted on it. But there must have been a feeling deep down that poetry is something to take refuge in and that poetry has a way of interpreting events and emotions that can be transformative, that makes experience into something else, more of what it really is maybe, something more resonant by being distilled. So much had stopped in the world around us, so much was cancelled or postponed or suspended, and it felt like this was something I could give.

I wasn’t sure how people would react, to be honest. The first person I wrote a poem for was a very close friend and I put quite a bit more into the poem than what she had sent me, all kinds of things came up as I was listening to the song she sent through. I felt like I was sitting in the room with her on the other side of the world, holding her hand, almost tuning into her thoughts, to where she was in space and time, emotionally in that moment. Sounds kind of weird, I know, but I kept trying to do that as I wrote these, to really be with the people I was writing them for. Quite a few have reacted emotionally, saying it brought them to tears, or broke open their experience in some way. Others were bemused or kind of surprised their experience could be translated into poetry. I wonder if the poems translate as poems on their own outside of these individual experiences of them. That’s something I’m curious about now that I’ve put them up on a blog. Is it the intimacy with that particular person and their experience in that moment that makes it potent, or something else about what we are all experiencing together, separately?

How have you been during this period?  Some writers and artists I know have enjoyed being in lock-down as they have more headspace and time to work on their projects.  I’ve had the opposite experience!  I admit, I am an introvert, so the side of me that likes to be alone and likes to be quiet has loved the excuse to not be busy, always doing more, or proving that somehow life is worth living because you are actively pursuing 1,000 things at once. I think we all suffer from this disease of busyness and moving around and not knowing how to be still and be with what really is. It was an excuse to turn inward, to write more, to contemplate where things are internally and with the world. It felt like an extraordinary moment, really, incredibly healing. But there is also a lot of pain involved, people are dying, there is a sense of doom in this, the long-predicted pandemic, the thoughts of this all being inter-connected with climate change and human interference with nature. It’s the stuff of nightmares that keeps you up. On the one hand this incredible sense of acceptance and realisation of where we are and how to be present with where we are, and on other hand that being a kind of dark place to be. I found the quiet and space really incredible, though, I could get used to that. Things got cancelled in my performance life, which stung, for sure. The losses of some of the creative work I had been building on for a year and a half felt really awful, and I’m still piecing it all back together. But then there is also daily reality – the pitter patter of a 7-year-old, lots of games to play, empty parks to run in, constant invention of ways to stay sane with a little person who is at home day and night. And a lot of cooking. So much cooking and baking. I felt very grateful for food, for the things we had. Suddenly acknowledging how incredibly fortunate we are, really.

I think we all suffer from this disease of busyness and moving around and not knowing how to be still and be with what really is.

What else are you working on at the moment?  I am working on my second book of poetry called, Iceland is Melting and So Are You. It’s about the climate emergency and the melting of the human heart, about feelings surfacing from the ice. There’s a lot of ice and water in it. It’s due for publication in 2021 with a press in Toronto called Book*hug.

I’m also working on an interdisciplinary solo theatre work called At the End of the Land about the liminal space between life and death. It involves dead schoolgirls from the Victorian Era, David Lynch on the unified field, a red monkey who listens to death metal and personal reflections on ghosts and being with the dead. There are miniature holograms and dioramas and huge projections as well, and I think now it is going to be a limited audience work. I always wanted to make it for a limited audience floating on their own small separate wooden bench seats. And with COVID, maybe that is something that will actually work well.

I also have an idea for an audio walk that I have started developing, called The Edge of the Event Horizon. And I am in the very early stages of a new performance work called, Zoology. It’s about extinction and wildness, and a girl outside a zoo in the Bronx playing the violin, and how Margaret Thatcher refused to transport a panda from London to Washington on her Concorde. So, yeah, there I go, probably keeping too busy again.

How do people get in touch with you if they want to be part of your project?  The best thing to do is to go to the contact page for the Pandemic Poetry Project blog as all the instructions on how to be in touch are there, including the questions to answer if you would like me to write you a poem.

The focus of this interview was on Talya’s Pandemic Project but I hope that when I have time, I can interview her again to find out more about her other projects. Meanwhile, you  can find out more about Talya’s poetry here:   https://talyarubin.weebly.com/ . Talya also makes dark and provocative performance work http://tooclosetothesuntheatre.com/ that asks challenging questions about our current reality, often probing the past to look into the future.