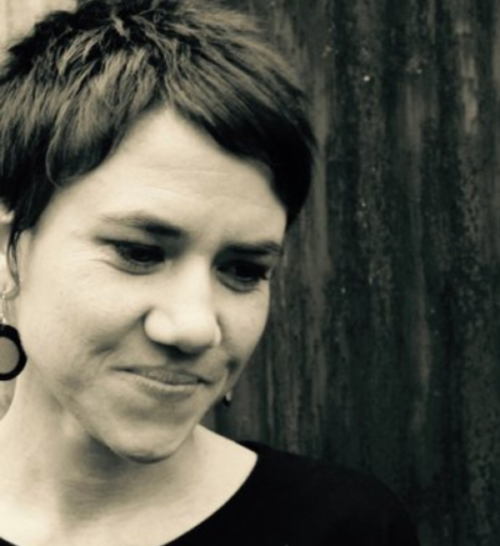 Nadia Rhook is a poet, historian, and university lecturer, and has a book coming out soon  about the language-scape of colonial Victoria (Duke University Press).

I first met Nadia last year at an AASRN lunch not long after she moved to Perth.  I didn’t really speak to her at that lunch but a few months later, saw her walking hurriedly out of the state library. I wasn’t sure if she recognised me and was worried about waving down the wrong person. (I’ve once befriended someone thinking she was someone else and only realising two years later when I saw the first person again, that I’d befriended two different people).  That day I saw Nadia again outside PICA —this time I waved—and again at Is Donburi -William Street (yes, I’ve mentioned this restaurant before), so with her identity confirmed, we had lunch together!  I told her I needed to get out more and find other writers so she invited me to a small poetry group. Experimenting with free verse really freed up my creativity and my current project emerged from one of these poetry writing sessions. I’ve learnt so much from Nadia in the short time I’ve known her. Her students are very lucky to have her as their teacher.

How did you get involved with AASRN? While I was doing my PhD I went along to a Melbourne meetup, organised by then convenor Tseen Khoo. I found it a group of energetic, talented people thinking and working through praxes of anti-racism, and I’ve been involved since. It’s been a joy to co-convene the Perth branch with Denise Woods this last year.

Can you tell me a bit about the book that you’re editing? The book is based on a survey of around 1200 Victorian criminal court trial cases. I read all of those where an interpreter was employed because there was a language difference at play in the trial, which opened up a picture of a colonial language-scape thoroughly polyglot and dominated by English language speech. Each chapter moves into a different Melbourne space – shops, factories, warehouses, courtrooms, and Parliament House – and so that we ‘hear’ how white settlers practiced various language-based forms of racial discrimination, and how English became the privileged language of settler sovereignty. They did so in conversation with people of Chinese and South Asian descent, who were adept at negotiating the settler legal system and racism. The book asks for a re-reading of the infamous Dictation Test, passed in 1901, which enabled the immigration officer to give a test ‘in any European language’ to practice discretionary racial exclusion. Linguistic power and entitlement have had a historically pernicious relationship to self-consciously ‘White’ Australian nationalism. It will be published with Duke University Press, and come out in affordable softcover!

What are you working on at the moment? I’m writing a new [university] course called ‘When Empire Strikes’, which looks at imperialism and resistance movements in South and Southeast Asia and Australia. I’m also finishing a book about speech and settler colonialism in 1890s Melbourne, and working on a poetry book about geographies of love and colonisation.

You’ve journeyed to the west, whereas Sarah , a writer I profiled in January, went “over east” – as we say in WA. Sarah said that there are more opportunities in Melbourne for people in her field. Are there more opportunities over there than there are here for poets? There are opportunities in both places – thank you gig runners and editors! But the scale and dynamics of the poetry scenes are a bit different. Obviously, there are more poets and more gigs in Melbourne. Here in Perth, I’m part of a small poetry writing group, which I love. In Melbourne I always wrote alone. It’s amazing how writing in company can bring different poems to being. The writing and academic worlds feel particularly linked in Perth, and I find it harder to be anonymous here – many days it feels a village of 2 million people.

There seems a real appetite for reading and writing and creativity in Perth ­– perhaps people appreciate and want to support other people’s talents more in a city less saturated with events. At the same time, since Perth is a sprawling spread out city and has some generational divides, there’s less energy in the system than Melbourne. That’s my impression so far.

Do you have a regular writing routine? What does it look like and does your poetry writing time cross over into your academic writing time? I usually write in the morning, and edit in the afternoons. When I can, I write poetry first thing in the morning before I start my academic writing and emails. It’s wonderful to start the day in a reflective space. Somehow it feels like stealing time. My routine is changing at the moment as I’m getting more momentum with my academic book. If I have a deadline, I find a late afternoon happy hour session can get me to over the line. I like to write with energy around me. Time flexibility is definitely a perk and privilege of academia, and creative writing has become part of my intellectual process and my wellbeing since I finished my PhD a few years ago. Poetry helps me get inside things, to imagine and process and map connections I find hard to do so in formal academic writing, not least my personal relationship to place, histories, and colonisation.

What is your idea of happiness? Being connected to the place I’m in, its history, and to the people around me. I have a new appreciation for that as basic to happiness having moved 3,500 kms (not that I’m counting) from Woiwurrung to Whadjuk Noongar country, from Melbourne to Perth, a year ago. Coffee and a good book. The ocean.

What do you value most in a friend? Honesty and loyalty

What talent would you most like to have? Comic. Maybe in the next life.

What’s your most treasured possession? Sentimentally, my Vietnamese-English dictionary. I got it when I moved to Vietnam 11 years ago and its full of words attached to memories of learning new words and of attempts to translate text messages and of hilarious and humiliating pronunciation struggles. It’s now just holding together, reinforced with sticky tape. Realistically, my laptop.

Your favourite journey?  A few summers ago my partner and I took a camper van trip to Gunditjmara country, the area around Portland in southwest Victoria, famous for the Budj Bim eel traps and stone houses. My paternal ancestor Matthew Rhook, invaded that beautiful country with the infamous Henty family in the 1840s after he got his convict ticket of leave. It was surprisingly nourishing to take time to talk back to my settler ancestors and re-imagine the intimacies and violences of the frontier.

Where would you live ideally? Here, but with rainforest mountains close by. No. At the moment Perth seems ideal, if in a challenging dystopic kind of way. I’d like to live near the Temple of Literature in Hanoi someday.

What’s next for you? I’m collaborating with Dr. Tess Do to write a history about Vietnamese people who were formerly indentured workers in New Caledonia, and the 1940s-60s politics of their repatriation to Vietnam.