Emily Sun lives and works on the unceded lands of the Wadjuk Noongar people.  Her works have been published in various anthologies and journals including Meanjin, Cordite Poetry Review, Australian Poetry Journal, Mascara, Westerly and Growing up Asian in Australia. Previously, Emily taught English and Literature in the secondary and tertiary education sectors in Perth, Sydney, London and regional Western Australia.  Between 2018 and 2020 she was the first runner-up in the national Deborah Cass Writing Prize, and the recipient of fellowships at both The Katharine Susannah Prichard and Centre for Stories writing centres for her poetry and prose. She is a founding member of  Invincible, a new writing collective based at Goolagatup Heathcoate. 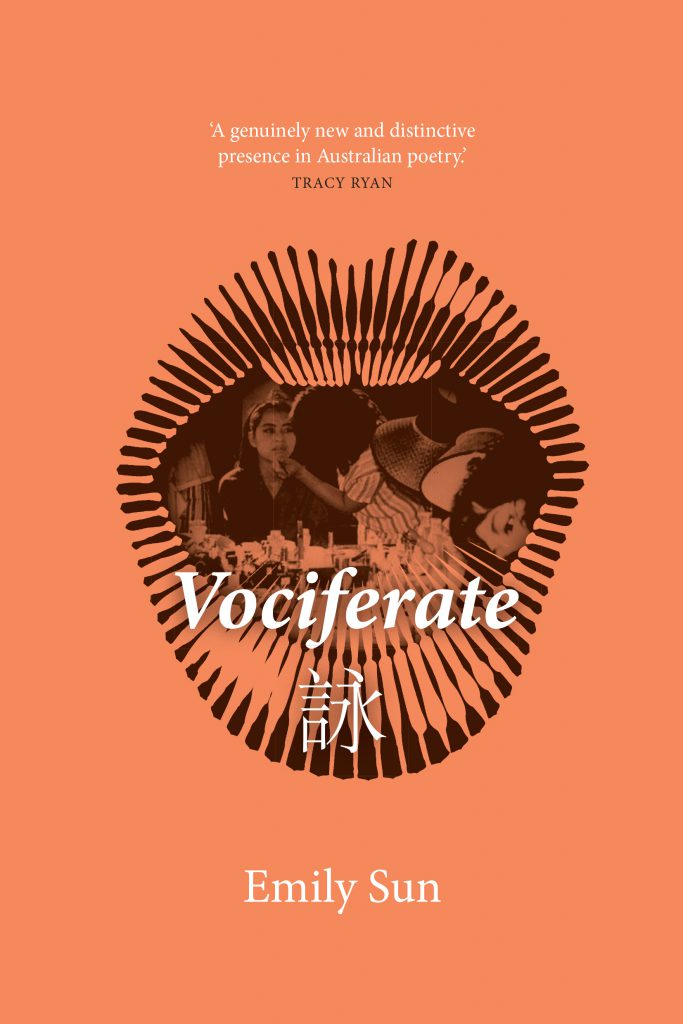 ‘Read this book from beginning to end, and then read it again, for all the things that aren’t declared until you understand its accomplished means of making the poem in itself, and the poem that keeps on speaking and growing.’

‘Emily Sun traverses continents and cultures in a daring poetic venture. History, philosophy, religion, popular culture — nothing is left untouched in a critical pursuit of the politics of identity and belonging, and how we are haunted by the legacy of colonialism.  Sun’s poems are sometimes delivered with sizzling rage, sometimes with sparkling humour, but always with formidable intelligence.’

‘Every poem here is like a little grenade, sometimes filled with sizzling rage, sometimes wry humour, but always with expansive wit and erudition. Vociferate is polemical, personal and political. Be prepared to be blown away!’

‘Ranging across continents, cultures and languages, Vociferate is a bold poetic venture, grounded in the multiple and the eclectic, from classical music to popular film, from literature through ordinary suburban living. No subject, no assumption, is left untouched by Emily Sun’s ironic, questing visions. She is a genuinely new and distinctive presence in Australian poetry.’

“ There is a quiet rage in the poems as well as a terrible beauty.. We hear so many anodyne accounts of how the world is, but what if the world was exactly how it appears in these poems? Broken, writhing, and electric.”

Vociferate touches its reader with its tenderness and sparkling sense of humour, punctuated by inside jokes and a mischievous love for the irreverent.

‘She’s the ‘Wandering Minstrel in Translation’ … This is Australian poetry too, with suburban settings providing material for many of the scenarios, though Australia can never simply be home. Place is layered and unstable, as fractured as the language that speaks.’

Available at all good book stores or @Fremantle Press

Scoring a Poem Q and A with Alice Stephens – Bloom!